On the verge of turning 30 years old, the Valdivia International Film Festival will open its 2022 edition with Mato seco em chamas, the acclaimed motion picture that just premiered at Berlinale.
To participate in the competition and the official selection, applications can be entered until April 29, 2022.

Valdivia, March 15, 2022. There is no solid distinction between documentary and fiction in Mato seco em chamas, the film codirected by Portuguese filmmaker Joana Pimenta and Brazilian director Adirley Queirós that only recently premiered – to great reception – in the Forum section at Berlinale. The movie, born out of the story of a group of women that extracts and distributes oil in a favela in Ceilândia, Brazil, will open the 29th edition of FICValdivia, which will take place in the capital of Los Ríos Region, between October 10 and 16 this year. 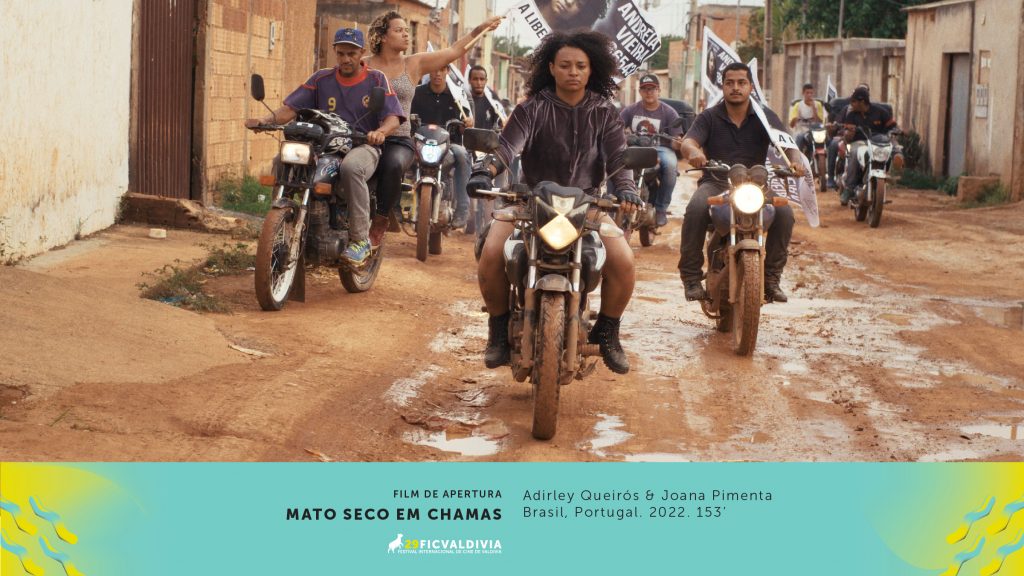 “This is a special edition of the festival: it is the antechamber to the 30-year celebration in 2023. Here we hope to come together once again, in person, to continue promoting that audiences come before the big screens at movie houses, of course with the best technical capabilities and observing every health protocol. As a team, we have been working with much hope and enthusiasm, to continue driving this cultural and artistic event, from our territory, contributing to country decentralization from the Los Ríos Region. This is why we want to invite filmmakers from around the world to come join us, to apply to the different competing categories at the festival. Likewise, we are very happy to begin our official announcements for FICValdivia 2022, sharing which will be our Opening Film, a motion picture that for us is fundamental, since it unites the spirits of struggle, resistance, solidarity, joy, the love for cinema, and a political vision. Mato seco em chamas is a dazzling movie, and it makes us very happy to have in Valdivia Adirley Queirós – whom we had invited to hold a retrospective of his work some years ago, which regrettably we were not able to finalize at that time – along with Joana Pimenta, both of whom have been part of our program in the past,” says Festival Director Raúl Camargo.

Film registration is via the FESTHOME platform exclusively, and it will remain open from March 15 until 6pm Chilean continental time (UTC-4), on April 29, 2022. The Official Selection will be announced in September, on the festival website at www.joseluisr15.sg-host.com.

Click here to see the call regulations. Directors, producers, and distributors can register their works at https://festhome.com/festival/ficvaldivia.