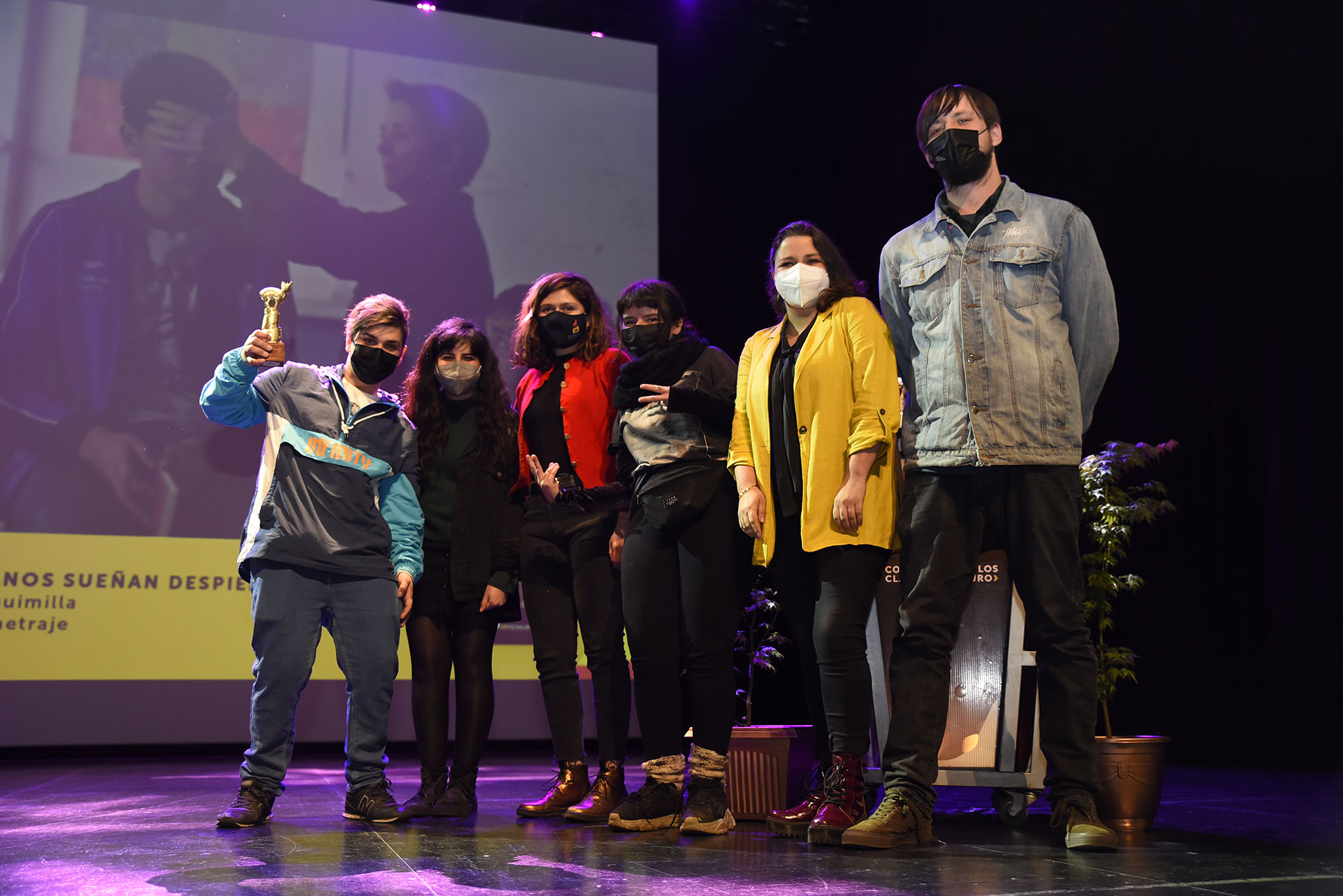 For the second year in a row, the Valdivia Chamber Orchestra (OCV) was in charge of kicking off the Closing Ceremony at the Valdivia International Film Festival. In a pre-recorded concert, the ensemble performed the winning score of the 2nd Music Composition for Heritage Short Films Contest, whose objective was to musicalize the short film Falling Leaves (1912), by Alice Guy.

The author of the award-winning piece is Copiapó-based composer Iván-Manuel Tapia Bruno, who received the accolade from Christophe Vauthey, Councilor and Deputy Chief of Mission at the Swiss Embassy, and Claudia Rivas, Head of Operations at OCV.

The ceremony took place at 6pm, Saturday October 16, at Cervantes Theater, with the attendance of local, regional, and academic authorities, along with members of the community. Also, the event was broadcast online via FICValdivia platforms, and partner media outlets.

The motion picture obtaining the highest award in the Feature Film Competition at the 28th Valdivia International Film Festival was the Chilean title MIS HERMANOS SUEÑAN DESPIERTOS, by Claudia Huaiquimilla.

The Special Jury Prize in this category was awarded to the Canadian film, ST. ANNE, by Rhayne Vermette.

Additionally, the jury gave two special mentions to the movies ONE IMAGE, TWO ACTS, by Sanaz Sohrabi (a Canadian, German, American, and Iranian coproduction), and the Chilean picture TRAVESÍA TRAVESTI, by Nicolás Videla.

The jury was made up of Argentine director, scriptwriter, and actress María Alché, Peruvian cinematographer and photographer Inti Briones, and Spanish film critic and programmer Martín Pawley.

The award-winning Chilean feature film this year was AL AMPARO DEL CIELO, by Diego Acosta, who received a prize of CLP 1,000,000, given by FICValdivia and Universidad Austral de Chile.

The jury of the Chilean feature competition this year was formed by Magdalena Arau, member of the programming committee at the Buenos Aires International Independent Film Festival (BAFICI), Mónica Delgado, social communicator, director of Desistfilm magazine, writer, teacher, and film critic based in Lima, and Miguel Valverde, curator, academic, and producer based in Lisbon, Portugal, one of the founders of IndieLisboa Film Festival, and director of Portugal Film.

The production that collected top prize in this category was the Brazilian picture Êxtase, by Moara Passon, selected by the jury for “its brilliant and creative way of portraying anorexia. Through a surreal optic, it contrasts personal reality with the social, economic, and political context in the country. It allows for a new perspective on this eating disorder that many people share, especially teens, capturing a struggle that goes beyond the body. It is a sensitive and innovative narrative.”

The Special Jury Prize in the category of International Youth Feature went to the South Korean motion picture Short Vacation, by Kwon Min-pyo and Seo Hansol.

The film received this special award for “capturing the liveliness of adolescence in a profound and innocent manner, with everyday elements that generate a connection with the characters. With an air of freshness, it transports you to another perspective on life, with the imminent coming of adulthood, which gives way to the beautiful emotion of openness to adventure.”

This time, the jury was composed of Francisca Cuadra, film graduate of Universidad Mayor and award-winner at the 8th edition of FACIUNI, Máfil student Paulina Huiscañanco, who starred in the series Paralelo, produced by Conectarte de Máfil Cultural Center, in 2019, and Adrián Plaza, a student from the Rodulfo Amando Phillippi School in Paillaco who participates in the Children and Teens Consultive Council in his community, coordinates the Los Ríos Regional Advisory Council, and is part of the National Children and Teens Advisory Council.

Twelve pieces, from Cuba, Brazil, Chile, Argentina, Ecuador, Colombia, Mexico, and Costa Rica, were selected to the competition for the best Latin American short film. The picture that collected the highest honor was the Portuguese-Colombian coproduction Abrir Monte, by María Rojas Arias.

The jury in this competition consisted in Udo Jacobsen, who is an audiovisual communicator, academic and researcher in film studies at Universidad de Valparaíso; Azucena Losana, a Mexican filmmaker and multimedia artist whose work has been the object of a series at the festival; and Valérie Massadian, a filmmaker and photographer whose two features, Nana, and Milla, have screened and received awards at prestigious international film festivals, including Locarno, Valdivia, Ficunam, and Doc Lisboa.

In terms of the films selected, the jury stated that “additionally, we would like to highlight two other shorts: Susurros del Hormigón, and Hoy no Hay Mañana. In this case, these are not awards or mentions. We simply wanted to highlight them as valuable films, during our remarks at this awards ceremony.”

La Caja de Mis Memorias, by Camila Ortega Puebla took first prize in the Latin American Children’s Short Film Competition at FICvaldivia 2021. About the award, the jury reflected on the importance of this picture, “because it lends visibility and relevance to the different experiences of children’s rights violations, while having a language that is appropriate for all audiences. Additionally, the animation, the colors, and the music are well suited and pleasant.”

In the same category, the Special Jury Prize went to Mi Papá Azul, by Catalina Etcheverry.

The Future Chilean Cinema category is a showcase for Chilean and Latin American filmmakers and producers, where they can generate networks, and professionalize and concretize their film projects.

This year, the second edition of Austral Meetings went into further detail. This space for training, dialog, and collaboration in southern Chile welcomed 16 projects, at different stages of completion, summing up the participation of the national audiovisual sector at FICValdivia. Likewise, over 15 professionals from the audiovisual sector provided advising and mentorship to the projects, addressing different creative and artistic aspects.

The jury in charge of handing down the awards was made up of Portuguese programmer, development consultant, and distributor Susana Santos, film critic, programmer and selection committee member at Berlinale Forum, James Lattimer, and Sung Moon, founder of HANCINE, the Korean Film Festival in Argentina, and a programmer at JEONJU.

In that regard, the jury said, “it is a movie that presents a protagonist whose ingenuity, passion, activist spirit, and audacity become manifest against the backdrop of a conservative society in which she performed tirelessly. It is a tribute in grainy VHS, not only to an entire branch in cinema, but also to a person that has already taken their last bow.”

In the First Cut category, the award went to Eclipse en el Caos, by Dubi Cano and Samantha Cabrera, produced by Fernanda Mancilla, Mimbre Producciones, who took away top prize and USD 1,500, from FICValdivia and Universidad Austral de Chile.

About the project, the jury mentioned that “the film has a patient and tender eye, always looking for new details in daily life to evoke its texture. It intertwines two hard situations, giving the spectator time and space to understand the complexity in its interactions.”

The Sonamos Award, consisting in 3 full days of sound mixing, and the Kiné-Imágenes Award, which involves the creation of a DCP Master, were granted to Bajo Sospecha Zokumentu, by Daniel Diaz, produced by Esteban Sandoval and Felipe Poblete, Pejeperro Films.

The fifth edition of the Explora el Cine micro movie contest is organized, within the context of FICValdivia, by the Valdivia Cultural Center for Film Pomotion and PAR Explora Los Ríos, from the Science, Technology, and Innovation Ministry.

The award-winning micro movie was Es un Sueño o no? by Josefina Arriagada, from Valdivia.

The jury also gave an honorary mention to the film Mundo Man, by María José Fernández, from Paillaco.

The Héctor Ríos Award, bestowed by the Chilean Cinematographer’s Association to the best direction of photography, this year went to Mis Hermanos Sueñan Despiertos, by Chilean filmmaker Claudia Huaiquimilla, with cinematography by Mauro Veloso.

The Valdivia International Film Festival was founded and is organized by Universidad Austral de Chile; it is produced by the Valdivia Cultural Center for Film Promotion; and it is convened by the Great City of Valdivia, the Los Ríos Regional Government, and Codeproval; it is financed by the Audiovisual Fund, the Program for Festivals Collaborating with the Audiovisual Arts and Industry Council, 2021-2022 Call, and the Collaborative Institutions Support Program by the Ministry for Cultures, Arts and Heritage; main partner DirectTV and official sponsor BancoEstado.