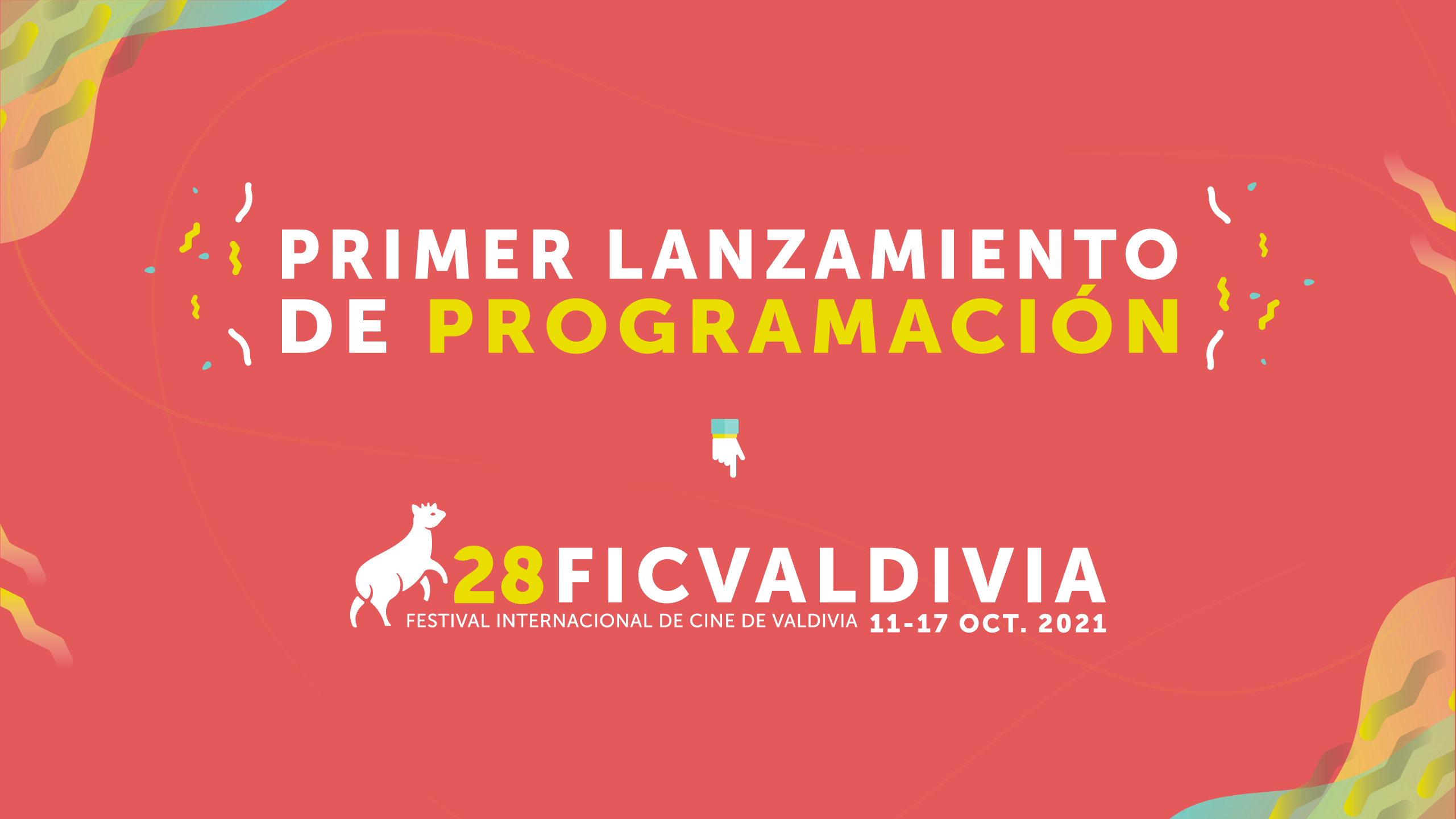 FICValdivia will take place between October 11 and 17, with 15 motion pictures selected for its Feature Film Competition.

Valdivia, June 30. The 28th edition of the Valdivia International Film Festival will take place between October 11 and 17. This year, FICValdivia organizers hope to celebrate a festival in a mixed or transitional format, due to the current health contingency. “Based on our 2020 experience, where we held a fully-online festival, along with a series of cultural activities, we hope to carry out this edition in a mixed format – in-person and online – that allows us to begin to retake instances to bring audiences together with motion pictures, of course, while implementing all the security and preventive measures, in coordination with the appropriate authorities. We are aware that this health contingency is not behind us, and therefore, we make a strong call to take care of one another. As a festival, we have a mission with our audiences, but also with the city of Valdivia and the Los Ríos Region. We want to reactivate and promote cultural and artistic activity, give a boost to our territory, and the technicians and professionals that support us, year after year,” were some of the highlights by Festival Director Raúl Camargo.

This initial sneak peek considers the following program announcements, to watch and enjoy this coming October:

Synopsis: One Image, Two Acts examines the British Petroleum photographic archives, during their operations in Iran, exploring the wide construction of cinemas by the organization, in the oil producing cities around the country, revealing how a homogenous colonial narrative was maintained by appropriating films and monopolizing the land.

Synopsis: A powerful and anonymous man has a peculiar hobby. He buys centennial trees, some as tall as 15-storey buildings, around the communities in coastal Georgia, and then he has them extracted from the earth, and brought to his private gardens. Transplanting trees of such sizes destroys the surrounding landscape, and forces communities to adapt to the intervention. Following the process, the film portrays the needs and values of present-day Georgian society, reflecting on forced migration, where “uprooting” is more than a metaphor.

Synopsis: Charles, a French gentleman from Montpellier, sells his home camera to Ignacio, an Argentine director traveling in France. Opening it, he discovers Charles’ videos are still in it. They both start corresponding, and in his letters, perhaps without noticing, Charles will write the script to the film represented in the images: a movie about sentimental relationships, infinite journeys, war conflicts always far from home, solitude, and the company of loved ones.

Synopsis: As a group ventures into the night, the news arrives that Renée has emerged from the darkness. This catastrophic moment drives the strange reunion between Modeste and his older sister. Renée has been missing for years, and her presence unsettles the family, which also includes her own daughter, Athene. As Renée starts to shape her dreams, out of fragments from her past, negative premonitions shake the earth.

Synopsis: Set in Nizhny Tagil, Rusia, Summer follows the nostalgic warm summer in the central Ural region of Vadim, an eight-year-old boy, and his half-sister Christina. In the afternoons, they enjoy bonfires with their teenage friends, ride their skateboards, and take relaxed naps in the park. Taking in the sun and the warmth of their relatives, hidden in the tranquility of the yard, far from the cruelty of the outside world, Vadim revels in his childhood. Like a peaceful lullaby that imitates the soft movement of the breeze, Summer transmits warmth, happiness, and solace, offering hope and strength for the future.

All these films will be available online, for the entire national territory, and, health conditions permitting, will also screen live in Valdivia.

FICValdivia is characterized for bringing together the best in contemporary filmmaking and the history of cinema, paying homage, all these years, to a series of motion pictures and directors that, in our understanding, have been fundamental, at the artistic and political levels, to the unfolding of this wonderful discipline.

The tributes this 28th FICValdivia 2021:

This section seeks to recover works that, at the time of their release, remained invisible due to the structural, ideological, or productive status quo. The program features two very different movies, directed by women, which were kept from the public eye in different ways.

The first one is The Blot, a social drama directed by Loise Weber (1879-1939), the first and only female filmmaker in the context of American silent film. Between 1911 and 1935, Weber built a career with over 150 motion pictures, most of them short films. This movie was produced outside of well-established studios, and it belongs in the last period of her abundant, yet scarcely known, body of work.

Out of a script by the director, The Blot is the story of an impoverished college professor that teaches the children of the wealthy families in the city, among them, a boy interested in the teacher’s daughter. The family’s precariousness and their needs to stay afloat, despite the sacrifices the father makes, are taken on by the filmmaker’s clear vocation for denunciation.

The Long Farewell (1971) is the third feature film by Kira Muratova (1934-2018), a Soviet director and a contemporary of Andrei Tarkovsky, who was creatively crushed by the regime’s repressive apparatus, even before he was. Muratova, who suffered questioning and censorship of her first picture (Our Honest Bread, codirected in 1965 with Alexander Murátov), had to bear the ban of Brief Encounters (1967), and also of her third piece.

The Long Farewell is narratively structured in a very free way, out of the relationship between a mother and son. The expressive licenses that Muratova took in this picture were considered, formally and thematically, far from socialist realism, which motivated a ban on the motion picture until 1987, when it was finally released, obtaining the Fipresci Award, at the Locarno Film Festival.

Lebanese director Jocelyn Saab (1948-2019) devoted her life to more than one artistic discipline, but it was her cinematographic work, particularly in documentaries, that opened the door to the modernization of Lebanese cinema, starting in the 1970s. Her body of work is characterized by a vocation for documenting contingency, from where she observed the development of internal tensions in her country, marked by armed conflicts, especially with a civil war breaking out in 1975, and the following Israeli intervention.

During this process, Saab documented how her own home turned into flames and rubble. From war coverage to documentary, from fiction to video essay, that same destructive flare drove her to develop a filmography that is full of strength, action, heartbreak, and poetry. Jocelyne Saab is an essential artist, and we offer a representative selection of her more than 40 years in cinematographic militance.

This focus is devoted to the work of two Colombian filmmakers that converged in their way of understanding cinema, both in the identity urgency in their format (8mm or 16mm), and in the political sense behind their discourse. Carlos Álvarez (1943-2019) was an early pen in film criticism at the beginning of the 60s, and throughout that decade, his vocation widened towards a reflection on the identity of the new cinema in his country, and also towards making long and short documentaries, together with his partner Julia Sabogal, who is also present in this focus, with her sole work as director. Both Álvarez and Sabogal were part of a contingent of filmmakers that wagered on marginality for their aesthetic allegiance and as the specification of their own political conception, a commitment that would mean incarceration and torture for both, in the mid-sixties, in the midst of the accelerated conflict between guerrillas and the State, during that decade.

Carlos Álvarez and Julia Sabogal exemplify the artistic-cinematographic commitment with social justice and the generosity of sharing a body of work that, today, must be recovered and restored for future preservation.

We have gathered three essential filmmakers from the history of essay films, with two representative motion pictures by each one, thanks to the support of the Wallonia-Brussels Delegation in Chile. In these three visions from the intimacy of “I,” where movement is key, from documentary to fiction, in the cinema of a Chantal Akerman in her twenties; from the place of the father to that of the son, in the works by an adult Eric Pauwels; all the way to the vital walks, reflections, and encounters that emerge in the filmography of an 80-year-old Boris Lehman.

From the constitution of a woman’s identity, Chantal Akerman (1950-2015) constructed a reflection about female modernity, where the presence of concrete physical spaces – many times ghostly and desolate – also defines her vocation to give accounts of taking control both physically and sexually. We are screening two of her first full-length films, the seminal Je, Tu, Il, Elle, where the director herself portrays a woman living in a desolate apartment. In the occasional encounters with fleeting partners, the director uses a specific way of approaching cinematographic time, and its deployment in conceiving each frame and scene. She utilizes the same conception in Jeanne Dielman, 23 Quai du Commerce, 1080 Bruxelles (1975), a meticulous narrative about the daily life of a middle-class woman who occasionally moonlights as a prostitute, to manage to survive, and which would become one of the most important motion pictures in Belgian cinema.

In a different focus, Eric Pauwels (1953) developed his approach to the audiovisual arts under the wing of French documentarian Jean Rouch, who guided him toward ethnographic cinema, where he originated his own work, tending to a more subjective documenting style, where his own first-person view gives the account of his observations. High points in this context are the two motion pictures that will make up this program: Lettre d’un Cineaste à sa Fille (2002), where the filmmaker’s daughter presses him to reflect on the role of the director as a storyteller, and La Deuxième Nuit (2016), where his dying mother’s agony makes Pauwels evoke the relationship between birth and passing.

In the distinctly experimental, Boris Lehman’s (1944) cinema derived from critique to the experimentation in documentary format, where he has made close to 40 pieces, between shorts and full-length pictures. From his extensive body of work, FICValdivia selected two of his most recent movies to be part of this focus. In Oublis, Regrets et Repentirs, which had its world premiere in FICValdivia 2016, the director documented his own daily life, in the span of 24 hours. Meanwhile, in Une Histoire de Cheveux (Sibérie) (2020), Lehman intertwines the idea of the body’s frailty with extreme experiences, like those living through concentration camps. FICValdivia will also be the first festival in the world to show this film, something that makes us extremely proud.

All these motion pictures will be available online for the entire Latin American territory, and if health conditions permit, they will also screen live in Valdivia.

The Valdivia International Film Festival was founded and is organized by Universidad Austral de Chile; it is produced by the Valdivia Cultural Center for Film Promotion; it is convened by the Great City of Valdivia, the Los Ríos Regional Government, and Codeproval; it is financed by the Audiovisual Fund and the Other Collaborating Institutions Program, from the Ministry of Cultures, Arts, and Heritage; main partner, DirectTV and official sponsor, BancoEstado.

All the information on our website and social media.