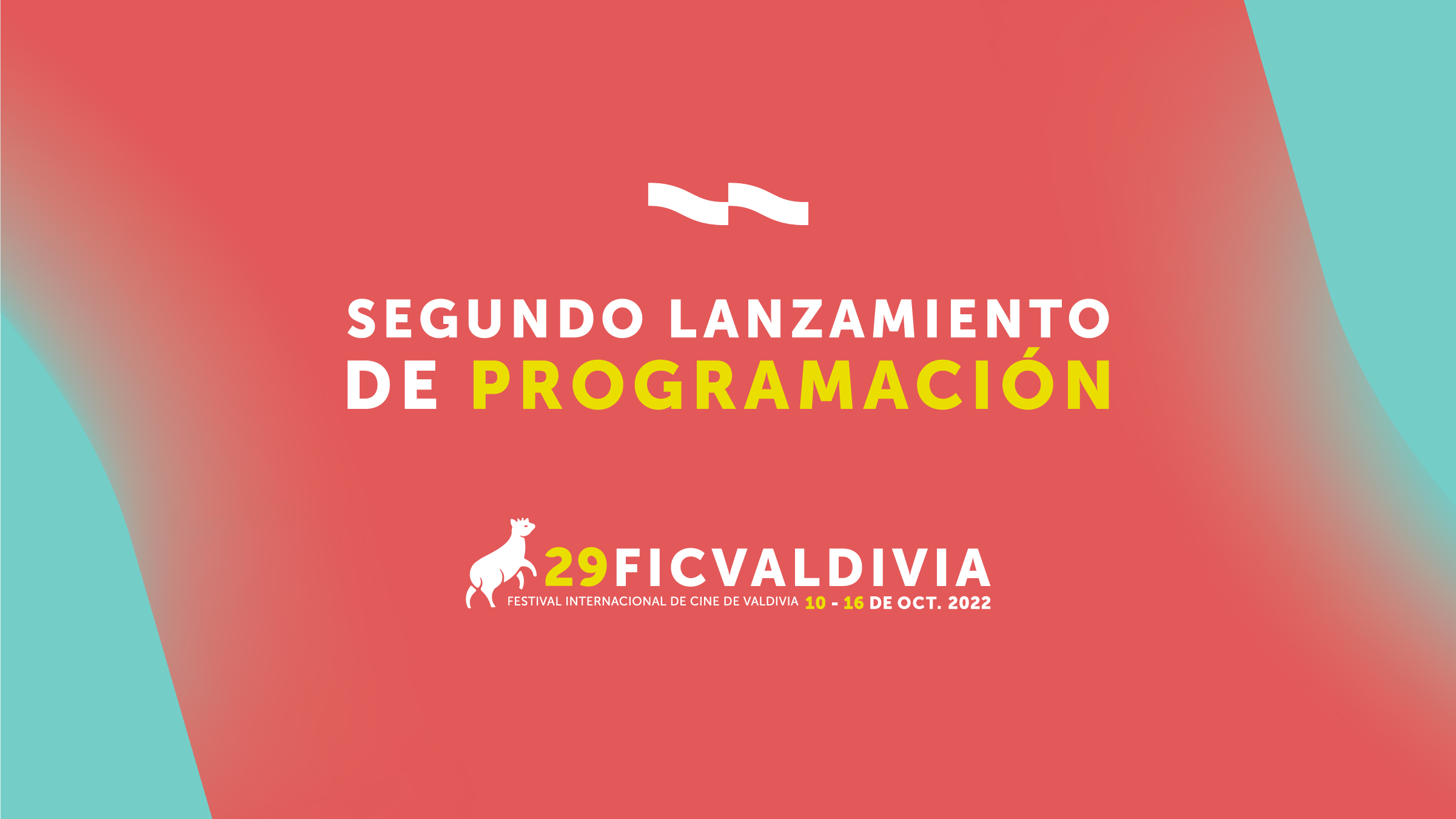 Valdivia, July 29. In this statement, FICValdivia presents the new movies that will be part of the Feature Film Competition, and of the Opening and Closing sections. These announcements add to the titles already released, and to other activities that will be available to enjoy completely in person, with an authorized mobility pass, from October 10 to 16, at the venues in the festival circuit of the marvelous city of Valdivia. Festival organizers are working in coordination with regional authorities, to comply with all health protocols, safeguarding the safety of everyone attending this edition.

Short Films at the Opening and Award Ceremonies

Thanks to the Universidad de Chile Cinematheque, Un Sueño como de Colores (1972), one of the first shorts by Valeria Sarmiento, was finally able to premiere, five decades after being shot. The piece was filmed in 16mm, in the midst of the overwhelming effervescence of the social and political processes Chile was undergoing. It was aimed, however, at capturing a more intimate reality, hidden among the folds of the political debate: the stories of two young performers working as strippers at the night clubs Mon Bijou and Tap Room, both located near the civic neighborhood, the area in downtown Santiago where a great portion of the political tension of the time unraveled every day.

With the support of Jorge Müller in camera, and Pepe de la Vega in direct sound, Valeria Sarmiento shot the routines and perspectives of her two characters, led by an interest to elicit from it a hypothesis about the role of women. But the picture did not screen, and after the coup d’état, the negatives were lost until 2021, when they were found and delivered to Universidad de Chile, for its restoration and 4k digital transfer.

The copy will screen during the opening ceremony of FICValdivia’s 29th edition, on Monday October 10.

Likewise, on Saturday 15, Étude Cinégraphique sur une Arabesque (1928), by Germaine Dulac, will be the motion picture in charge of opening the awards ceremony. Dulac is still a relatively invisible name in cinema history, despite her importance not only as a filmmaker, but also as one of the first cinema theoreticians, who attempted in her writings to reveal the purely visual properties of the new medium, especially those related to rhythm and movement as essential elements. The short film that will show at the end of the festival is precisely part of this kind of non-narrative visual document, where Dulac relates images that share the depiction of an internal movement – machinery, landscapes, water fountains, light reflections, etc. From these purely rhythmic relationships, the film grows towards a greater, almost symphonic dimension that organizes and gives coherence to the elements in the frame.

The short runs for approximately five minutes, and during its screening at the closing ceremony, it will have an additional attraction. The film will be accompanied by the award-winning score of the Third Musical Composition for Patrimonial Short Films Contest, organized by the festival, together with the Valdivia Chamber Orchestra. The latter will be in charge of playing the musical piece during the event.

The Central Film this year will be Unrueh, second feature by Swiss filmmaker Cyril Schäublin. The director was already internationally acclaimed for Those Who are Fine (2017), awarded at Locarno for Best First Film, where he elaborated a meditation about the incompatibility of affections and the alienated day-to-day existence of urban life.

Unrueh takes on similar topics, but incorporates them while travelling towards the source, reviewing the relationships among the inhabitants of a Swiss village, in 1877, who debate between the craftmanship of windup clocks, and the imperative changes the advancements of industrialization start to impose on their productive routines. The tension finally centers on the disagreements among anarchists, and their confrontation with small business owners, which the film takes on in a somewhat comedic staging that it both distant and ironic, while sometimes approaching documentaries. In each one of its curious characters, it is possible to clearly trace the power dynamics, the political divides, and the worldviews that cross over Europe today. Unrueh obtained the prize for Best Direction, at the Encounters section, in the recent edition of the Berlin International Film Festival.

The Closing Picture, in turn, will be Notas para una Película, the new full-length by Ignacio Agüero, which in principle is, without counting the director’s collaboration in the series Heredia & Asociados, in 2005, his first approach to fiction. However, for Agüero, a director that has established a filmography questioning and reflecting about the mechanisms of filmic construction, this format classification has always been too narrow.

His new picture evolves from the vison of Belgian engineer Gustave Verniory, who settled in southern Chile towards the end of the 19th Century, hired by president Balmaceda’s administration, to lead the extension of the railroad to the areas of Victoria, Lautaro, Temuco, and Pitrufquen. The man had to deal with the tense relationship between the Chilean institutions and the Mapuche people. As a direct and disinterested witness of this struggle, Verniory distilled his experiences into 10 años en la Araucanía: 1889-1899, a book that constitutes a detailed source regarding the origins of this conflict, and that Agüero takes as reference to construct his film.

La Vaca que Cantó una Canción Sobre el Futuro is the first feature by Francisca Alegría, which premiered at Sundance this year. Its starting reference point is the devastating pollution of the Valdivia River, in 2004, unleashed by Celulosa Arauco y Constitución, a paper pulp plant. The slaughter of wildlife in the area motivates a dead mother to come back to life, many years after her suicide, to reunite with her family. On this basis, La Vaca que Cantó una Canción Sobre el Futuro transits through the environmental contingency, while at the same time communing with a nature that, before imminent death, literally expresses itself through song. The experience of death as final destination and the urgent need to rebuild broken ties are the starting point for a film that underscores the intimate relationship between humans and their environment.

Tan inmunda y tan Feliz, fourth full-length picture by Wincy Oyarce, was one of the projects selected to Future Chilean Cinema 2021 – First Cut category –,one of the most important industry activities at FICValdivia, and this year, it bursts into the competition. Using a great amount of archive material, the documentary narrates the career and legacy of Víctor Hugo Pérez, who passed away prematurely in August 2014. With the drag queen pseudonym “Hija de Perra,” Pérez became a key Chilean underground artist in the 2000s, and an activist for LGBTIQ+ rights. The tale the film depicts comes directly from the deep bond of friendship Hija de Perra and Oyarce shared, and it is a creative and human biographical sketch, and also a gaze into the struggle of sexual dissidence in Chile, over the last two decades.

Kukaan Ei Katso Sinua Silmiin is the first full-length film by Finnish director Jesse Jalonen, and it starts with a plotline that seems out of a game. People are suffering from Louis le Prince Syndrome, which makes them invisible to other humans; the only way to hear and see them is through cameras and microphones. With such a topic as basic conflict, the picture could very well approach the ghost genre, but Jalonen pushes it into the terrain of realism, to delve into the invisibility of the masses. With that premise, the picture, which premiered this year at the Rotterdam Film Festival, intertwines the tales of two people that suffer the disease: a single father that can only be seen by his daughter, and a young woman that has established a virtual relationship with a boy. With them at the center, the story sometimes turns into documentary, exposing the solitude, the anonymity, and the yearning to be noticed that stems from the mediatization of human lives.

Similar to The Cloud in Her Room (2020), Jet Lag, second picture by Chinese filmmaker Zheng Lu Xinyuan, which premiered this year at the Forum, in Berlinale, is an experimental film that collects visual experiences documented during lockdown, and over a trip the director made from Austria to China, in 2020. The impressions during the journey blend with family wounds, through a journal that works as the excuse so the crisscrossing temporality in the narrative can delve into the figure of the filmmaker’s great grandfather, who disappeared in the 1940s, in Myanmar. With all these elements, Jet Lag connects images, visual formats, recollections, pandemic anxiety, and political memory, in a story that is, at the same time, human and object based.

The last of the five new films to be announced is Nous, étudiants!, by Congolese director Rafiki Fariala. The tale examines the state of higher education in Central Africa Republic, an old French colony that secured its independence in the mid-1960s. This naturalist-style narrative centers on four economy students at the University of Bangui, the capital, and stops to analyze the climate within the classrooms, the precariousness of the job market, and of a dream of progress that has been engendered in recent years, amid coup d’états and civil wars. The picture premiered this year in the Panorama section, at Berlinale, and collected the Best First Film prize at IndieLisboa.