Sion Sono “The way things are, I don’t think I will film in Japan again”

Japanese filmmaker Sion Sono (Toyokawa, 1961) can well be within the most exuberant personalities to come to FICVALDIVIA. The owner of a filmography with over 50 titles, where he has tackled every manifestation of popular and genre cinema conceivable – exploitation films, B horror movies, fantastic cinema, catastrophe dramas, vampire flicks, mockumentaries and hard police pictures –, he shaped his visual abilities with imagery extracted from manga and diverse pictorial arts, guiding a chromatic palette that is more than just a nod to pop culture, building a fascinating body of work, intense, disparate and at times, brilliant.

The selection of films that accompanied the director over his week in Valdivia was tailored to give an account of the broad expressive possibilities deployed in his work, and also for the premiere of his most recent picture, the condensed version of the series Tokyo Vampire Hotel (2017), made for Amazon. Also in the program were Suicide Club (2001), his first successful movie; the romantic epic running almost four hours Love Exposure (2008); Guilty of Romance (2011), arguably his best film; Why Don’t You Play in Hell (2013), a black comedy that features the perfect crossover of film-within-a-film and a Yazuka picture; and Love and Peace (2015), Sono’s closest attempt at a movie for children.

As the director meandered to and from the different venues, the number of adepts grew ostensibly in each of his films’ screenings. This sort of cult became organized in just a few days, and the younger tiers of the festival audience interacted with a jovial filmmaker, always willing to answer questions.

Sono, who drifted to cinema from poetry, is completely self-taught, and from that line that separates him from others in his generation – even from someone like Takashi Miike, who is very close to his vision of the urban nightmare –, he has been able to construct a distant and not quite romantic vision of his craft. 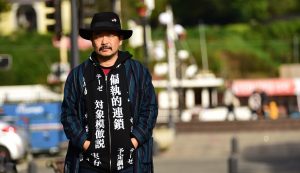 How was the poetry you used to write?

I started writing when I was 18. Then, of course, I was writing about what was happening to me at that age, and what my youth was like, concretely, about the people I met and about my discrepancies with the school system. During that time, I used to be against almost everything, so I wrote about that and about how immature we were.

What was your relationship with cinema at that time?

Every since I was in grade school, I began to have an interest in films, but in those days, I didn’t go to the movies that much, and I watched most films on television. I really liked John Ford’s movies starring John Wayne, and Hitchcock’s, featuring Humphrey Bogart. I watched all of them, of course, in black-and-white. Fundamentally, what I watched is classic American cinema, not Japanese films – mostly films from the 30s, 40s and 50s. I was born in a rural community, where teachers, my parents and my schoolmates seemed disagreeable to me. Naturally, I felt an anxiety to leave, because I didn’t feel comfortable in that place. For that reason, I preferred movies.

So, you would say it was classic American cinema that marked you most deeply.

In reality, it was a mix of classic cinema and a few Italian and French films. But in terms of numbers, I watched much more American cinema, because it was what screened most on television.

In that regard, did you connect more closely with television language than with cinema?

Of course, at that time I was closer to television. Then, when I went to high school, I was able to move around more, and I started to go to the movies. 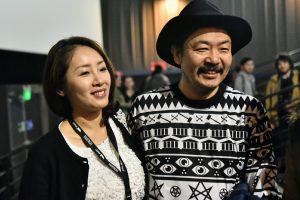 Both the possibility that Prime Minister Shinzo Abe may call for an advanced election at the end of this month, and the Korean threat, make up a similar climate to what you have portrayed in some of your films.

Yes, but the current political situation in Japan seems very unattractive for me to make a movie. At this time, I am much more drawn towards ancient Japan, than to the present.

Despite that, the violence you show on your films very seldom is institutional. It is essentially individual, and in that regard, there is a strong moral sense in your cinema.

Violence isn’t the topic that interests me most, although there is some of it in a number of my movies. There are many others that have nothing to do with it. I have also made comedies and dramas, in addition to films about earthquakes in Japan, which is another topic that interests me. I don’t just do one thing.

Do you think first about the genre of a film before making it, or about different aspects, like its rhythm, for example, which is usually a defining characteristic of the style of each movie?

I simply do what I want at the moment. I try to be completely free, without any imposition of topics and forms.

I find really striking the way in which you deal with family, young people and the fracture with adults.

All the young people in my films are described as I see them in reality. This doesn’t mean they are all that way. The thing is, right now, youth really is that independent. They want to solve their problems alone, without interference from adults. That is the breach that surfaces in many of my movies. There are times when I have to capture situations that are unthinkable to me, regarding what young people do; I capture that too, and these situations are not planned, but arise during filming.

I associate your style of making movies with the way classic directors, such as Howard Hawks and John Ford, used to. It is an approximation that seems to me much more intuitive than rational.

That is the influence from the movies I watched when I was a kid. It is not really intuitive, but it is something has impregnated my skin.

You often employ music in your films, Beethoven, Wagner, Ravel, etc. Why?

This is basically because I like music. I haven’t had good experiences working with scores composed especially for my films. When I have asked certain musicians to compose for my movies, for the most part it hasn’t coincided with the topic or with what I want to express. I prefer looking for it myself. At the moment, I don’t think there are musicians talented enough to take on that role in my movies, and I think the same of the composers working in Hollywood today. I prefer classics like Michel Legrand and Nino Rota, but I think sounds like theirs are no longer possible.

Do you conceive sound at the same time as image or do you sometimes conceive a film from there?

I conceive sound after filming, when I make the soundtrack. But even then, it is possible for it to change.

You have said some times that you adjust to the budget you have. With that, in a film like Love Exposure, there are images with different textures; some appear to have been shot on video.

Yes, I used it in that film, and I keep using it. I can’t tell you why, but I often use both formats.

Do you play with formats because of the textures?

Obviously. Today, I make everything in digital, and it is not a matter of budget, but of the image. 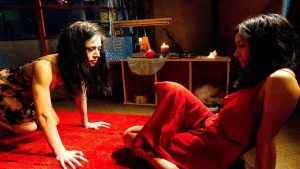 In some areas, both in Love Exposure and Guilty of Romance, sexuality is shown essentially as an escape route. In that, I felt Nagisa Oshima’s influence, a cinema where sexuality is not particularly freeing.

While I write, I am not thinking of a specific way to treat sex. This comes up naturally, while preparing the film. But assuming that would be like thinking that if one of the actresses in my movies has a long neck, I am necessarily thinking in a Modigliani painting.

You have said it has been hard to be accepted in your medium.

As I am self-taught and also a little bit of an outsider in the Japanese medium… Currently, films are made that have very little content. Sometimes I see films that deal with someone preparing a dessert, films that practically have no story, which is somewhat the opposite of what I do.

Does Why Don’t You Play in Hell reflect in any way your current position on the state of Japanese cinema?

As I feel different from the rest of cinema, I don’t think too much about how it is currently functioning in Japan. The truth is, the way things are, I don’t think I will film in Japan again. I am more interested in shooting in the United States, in China or in Europe. I am not interested in how movies are being made in Japan, how the climate and the stories are being portrayed. This is why I feel it is time to leave my country. This added to the fact that there is no affinity for my movies in Japan; they don’t like them. If that were different, I would be interested in staying in Japan.

But, despite what you say, you have been able to make very lengthy films, you have shot over a movie a year, and you enjoy considerable international prestige.

Yes, but they have never liked my movies that much, especially the first ones. Since they are having greater international success, now the Japanese industry is starting to take some note of my films and respecting me a little. In a way, the same thing happened to Kurosawa; before Rashomon was awarded in Venice, he was virtually unknown. Japanese society is very skeptical in that sense: they only become interested once something gets international recognition, and they are very cold towards film directors.