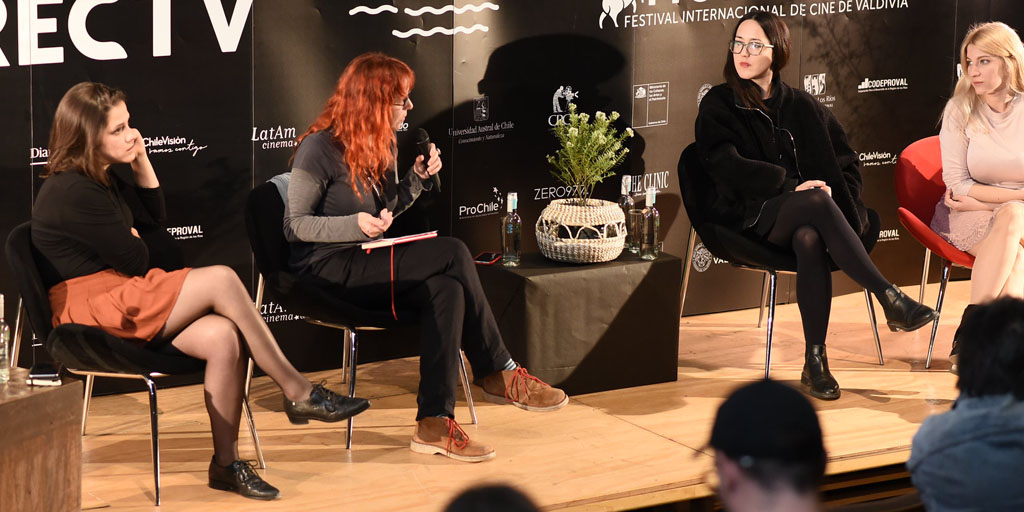 This Thursday, at 12pm, the second Voces Cine panel was held at the CECs Tent, under the title

This time, participating in the conversation were Carlota Moseguí, Spanish programmer at Márgenes Festival, filmmaker and founder of Centro de Cine y Creación (Center for Cinema and Creation), Dominga Sotomayor, and Daniela Camino, Chilean director, and member of the board at the Association of Independent Producers.

At the activity, which was moderated by Festival Industry head Tehani Staiger, the discussion touched on the importance of collaborative work, as an advantage for the development of cinema in terms of industry, and audiovisual production.

During the activity, noted director Dominga Sotomayor explained the case of Centro de Cine y Creación, which she founded, highlighting its orientation towards partnership as a basis for functioning, and how cinema is inherently a collective endeavor.

In turn, Spanish programmer Carlota Moseguí presented the case of Márgenes Festival, which at the time wagered on the collaboration of several countries for a simultaneous event. However, the initiative failed due to the difficulty, and scope of the task.

Producer Daniela Camino spoke about the case of the Independent Producers Association, highlighting how the common vision, and way of working of some dissident producers from another trade union resulted in the birth of the organization.

The Voces Cine series is a space to gather, and debate around the audiovisual arts, in artistic terms, as an industry, and in relationship to its role and contribution to society. Each year, important filmmakers, critics, originators, and other personalities arrive in Valdivia to contribute their experiences, and vision, in order to stimulate reflection.

The panels close tomorrow Saturday at 12pm, with the gathering entitled “Chilean Cinema: How do they see us from abroad?” The activity takes place at the CECs Tent, with free admittance.