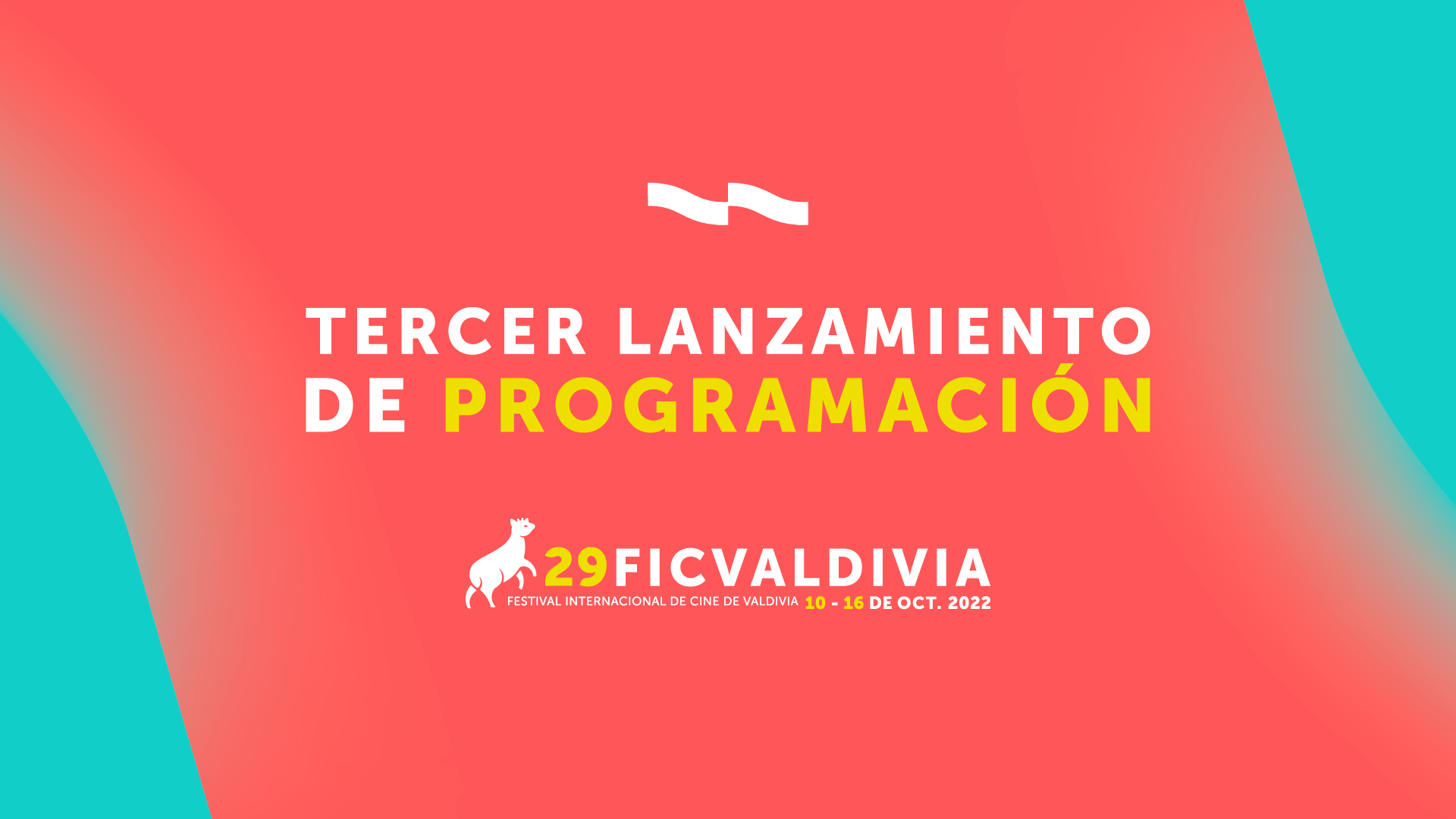 With a return to in-person activity, the Valdivia International Film Festival announces the films in the Gala section, and the Focuses for this 29th edition. Festival passes will go on sale on the first days in September, celebrating this version of FICValdivia, taking place October 10 to 16.

News in the Gala section

This non-competitive category gathers the latest works by filmmakers who have contributed to expand the horizons in contemporary cinema, through a sense of staging that is marked by a permanent pursuit.

The first confirmed picture is The Novelist’s Film, the recent title by prolific South Korean director Hong Sang soo, which obtained the Grand Jury Prize at the Berlin Festival, this year. As in a good portion of his movies, the author insists in a universe of characters linked to the world of cinema. In this case, the center of the story is the zigzagging itinerary of a writer that arrives in the city to present her book. There, and always by chance, she meets a woman and her filmmaker husband, and then an actress, with whom she incubates the idea of making a movie. Based on a changing structure, that sometimes moves back and then forward in another direction, the picture delves into one of those omnipresent topics in the director’s filmography: the eternal search for a partner.

Another of the films present in this program is Alcarràs, the new motion picture by Spanish director Carla Simón, who codirected the short documentary Correspondencia, together with Dominga Sotomayor, and which was part of the Opening Ceremony at FICValdivia 26, in 2020.

Alcarràs describes the implications of the decline in agrarian activity in that area of Lérida provice, in Catalonia. It narrates the harvest ritual of the last peach crop at a family’s plot of land, before the group leaves, and solar panels are deployed in the area. It is a small crisis, at once intimate and social, implacable and imperceptible. It is everything the director needs to unfold her picture, which gives special attention to the states of nature, and the points of view of children. It is from here that it opens to a register closer in style to anthropological documentaries, that manages to cover an entire community. The movie received the Golden Bear, at the 2022 Berlin Film Festival.

By Austrian filmmaker Ruth Beckermann, FICValdivia had already screened The Dreamed Ones, in the Gala section of its 23rd edition. This picture, with its greatly original narrative device involving two actors at a film studio, stages the correspondence between Ingeborg Bachmann and Paul Celan, which took place during the 1940s. This year, Beckermann returns with Mutzenbacher, a picture that revives a classic erotic text about a Viennese prostitute the director incorporates into her film indirectly, giving fragments of the writing to several men, for them to read and discuss. They are passages filled with eroticism, and, through a detached, divested staging, the movie analyzes the current status of masculine morals. Mutzenbacher collected the Best Picture award, in the Encounters section, at Berlin 2022.

Another reunion of sorts is the screening of the new movie by Catalonian filmmaker Albert Serra – Pacifiction – who had already been part of FICValdivia’s Gala section with Historia de mi Muerte and La Muerte de Luis XIV. His latest picture premiered in the Official Selection at Cannes 2022. It is based on the figure of a corrupt Commissioner of the Republic, the representative of the French government in Tahiti, during the 1970s, who built a network of crossed relationships, based on seduction and fear, in midst of the atomic testing France reactivated in Polynesia. As he has done in other films, Albert Serra organizes the narrative based on the ritualistic dimension of his actors’ bodies, in this case, on Benoit Magimel’s exuberant work in the leading role.

Magdala, by Damien Manivel, premiered in the ACID section, at the recent edition of the Cannes Film Festival and, like his previous vehicle Enfants D’Isadora, which screened in the same section at FICValdivia 26, the story is built from scraps, with an emphasis in his powerful capacity of observing gestures. The movie takes on the final moments of María Magdalena (portrayed by dancer and choreographer Elsa Wolliaston), who has been expelled from Christian communities, living her old age as a hermit, in the woods, feeding on wild berries and rainwater. Manivel’s picture pays attention to the rhythms defined by the closeness of death, and with a staging that is almost bereft of dialogs, by lingering on the natural details, evoking the protagonist’s memories and the ambiguous relationship she had with Jesus.

Fiebre, the third feature by Chilean director Elisa Eliash, is the last confirmed title in this section. The movie, which will celebrate its World Premiere, deals with the universe of children, based on Nino’s tale, a boy that, experiencing a night of high fever, is absorbed into a painting, coming into a universe plagued with strange and fascinating images. Nino’s little adventure will involve him trying to escape and return to reality; here, the director expands and prolongs what she had already announced in her previous short Un poco de fiebre (A little fever), which premiered in the Latin American Children’s Short Film competition at FICValdivia 27, where she already constructed an imagery that approaches Alice in Wonderland.

The festival also announced the focuses devoted to Portuguese filmmaker João Pedro Rodrigues, to Spanish director Elena López Riera, and to the Mexican authors that make up Colectivo Cine Mujer.

In João Pedro Rodrigues’ case, FICValdivia has programmed an almost complete retrospective that begins with Odete (2005), his second motion picture, and includes the recent Fogo-Fátuo (2022), a futuristic fable premiered in the Directors’ Fortnight at Cannes, with open references to present-day Portugal, which Rodrigues packages as an erotic musical; and Onde Fica Esta Rua? ou Sem Antes Nem Depois (2022), a documentary he codirected with João Rui Guerra da Mata, that deals with and updates Paulo Rocha’s classic The Green Years (1963), based on its protagonist, Isabel Ruth. The staging exacerbates the non-realistic atmosphere in the same manner the directing team employed in A Ultima vez que vi Macau (2012), the gorgeous film inspired in Welles’ The Lady from Shanhai, which is also part of this focus, along with the shorts Alvorada vermelha (2011), Manhã de Santo António (2012), O Corpo de Afonso (2011), and the full-length pictures Morrer como um homem (2009) and O Ornitólogo (2016).

The focus on filmmaker and visual artist Elena López Riera includes her three short films – Pueblo (2015), Las vísceras (2016), and Los que desean (2018) – with which she initiated an anthropological observation project that delves into cultural inheritance, the relationships between the individual and the community, and the sense of connection between the new generations and their past. These elements are also present in her first feature, El agua (2002), where she documents the commotion in a small town in southeastern Spain, caused by a summer storm that threatens to overflow the main river. This contingency reignites in the inhabitants the belief that some women are destined to disappear with every new flood. This possibility affects three women, of different generations, whom the town predicts could be possible victims. The movie premiered last year in the Directors’ Fortnight at Cannes. Elena López Riera will be at FICValdivia, thanks to a collaboration with Acción Cultural Española.

The third focus to be announced is devoted to recovering the work by Colectivo Cine Mujer (Women Cinema Collective), that was established in Mexico, in 1975, by a group of women influenced by the events of May 1968, in Paris. While studying in France, Rosa Martha Fernández, in light of that year’s revolutionary movement, began contacting feminist activists, and, on returning to Mexico, started working as an essayist and, soon after, as a filmmaker. She would be instrumental in the collective’s first stage, eventually joined by Beatriz Mira, Guadalupe Sánchez, Maricarmen de Lara, and Sonia Fritz, among others, who would collaborate in script writing, along with other creative and technical tasks. All of them will be in Valdivia, a true tribute to their oeuvre, which regrettably has remained invisible for decades. Aware of this fact, FICValdivia initiated a partnership with Filmoteca UNAM, to digitalize the original negatives of part of the production associated with Colectivo Cine Mujer, to contribute to their recognition.

The collective began activities at a radicalized and strongly politicized moment, marked, among others, by the consequences of the Tlatelolco Student Massacre, setting its bearings on cinema that moved away from conventional denouncement formats (survey documentaries) to take on freer alternatives. That is the case with Cosas de Mujeres (1975-1978), by Rosa Martha Fernández, which gathers women’s testimonies and their abortion experiences. Later, Fernández made Rompiendo el silencio (1979), a documentary-fiction hybrid that works as a denunciation of female rape, and beyond that, the complicity in the Mexican judicial system and the Church, along with consequent aspects of family rejection, and social vulnerability. The same year, Beatriz Mira filmed Vicios en la cocina, a picture that centers on domestic work, and which collected an Ariel award to the best documentary short.

The collective also delved into other formats, including animation, the contribution of graphic designer Guadalupe Sánchez, with Y si eres mujer (1977), about sexist education. Meanwhile, María Eugenia Tamés and Maricarmen de Lara released a medium-length film, independently, although at the same time related to Cine Mujer; No es por gusto (1981) takes on the reality of a group of female prostitutes in Mexico City. Es primera vez (1981), a collective work led by Beatriz Mira, captures the communion of over two hundred women from multiple organizations who came together, in 1980, to share experiences. These two films coincide with Rosa Martha Fernández’s departure to Nicaragua, opening a new stage in the collective. In this new cycle, film editor Sonia Fritz made Yalaltecas (1984), a 27-minute short intimately linked with Por Primera Vez, insisting in the hybrid format – documentary and fiction – to tell the story of a group of women in a community in the Zapotec mountains, Yalalag, who have carried a struggle against the chiefdom in their village since the start of the decade, and have created the Yalateca Women’s Union, with the aim of improving their living conditions.

All these works, despite their historical importance and the topical contingencies they deal with, were mistreated by (the mostly male) cinematographic critics, and simultaneously removed from Latin American cinema history. In recent times, a series of writings have sought to replace their importance, especially because -regrettably- the situations these films discuss, decades later, still continue to be at the fore. We hope that, starting with this edition of FICValdivia, both the movies related to the collective, as well as the later filmographies by Rosa Martha Fernández, Beatriz Mira, Maricarmen de Lara, Guadalupe Sánchez, Sonia Fritz, and their colleagues can find the diffusion and recognition they deserve.