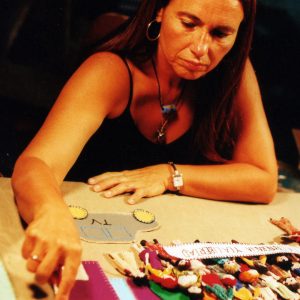 At FICValdivia, I attended the premieres of unforgettable films that have an important place in heart. I especially remember the striking documentary Estadio Nacional, by Carmen Luz Parot, and the good reception for Cristián Jiménez’s short film El Tesoro de los Caracoles. There, I also witnessed the first forays of young Chilean filmmakers, such as Sebastián Lelio and Matías Bize, and I also watched foreign movies that have only screened at the event.

At the festival, I met people that have been and will continue to be my best friends and most important role models.

At the festival, I taught my first animation workshop for children, precisely to kids in Valdivia and the vicinity. Thus begun a long workshop pilgrimage, around the country and abroad.

But what has filled me with the most satisfaction is an event we programmed together with Lucy Berkhof. At a time in Chile when animation was in its initial stages, and little was known about what was happening in that regard in other countries, I gave a talk entitled, “Surrealism in Animation.” We filled the room. I was amazed by the enormous interest young people in Valdivia showed for pieces by Jan Svankmajer (Dimensions of Dialogue I, II, and III, Alice, and Faust); by the Brothers Quay (Street of Crocodiles, The Epic of Gilgamesh, The Cabinet of Jan Svankmajer); by Tim Burton, who was just starting to make a name for himself; and by the Bolex Brothers (The Secret Adventures of Tom Thumb). These were all surrealist animations that I collected in VHS, which were hardly known in Chile. We watched them, talked, and discussed about the connection and influences among these authors, who began a European movement that started in the shadows, in Checoslovakia, during the times of the Soviet Union, and which remained hidden even after Perestroika, when Jan Svankmajer became known.

Among the festival anecdotes, I cannot forget that event organized by Abdullah Omidvar – I can’t remember if it happened during the festival opening or closing – for which he hired a belly dancer. Or, Luis Alarcon’s birthdays, which always coincided around the dates of the festival – these indispensable guests always made FICValdivia something very special.

I have to comment that I love the way the Valdivia Festival has evolved, the way they select the movies they screen, giving much importance to the authorial aspect, which, in my humble opinion makes it the most interesting festival in Chile.