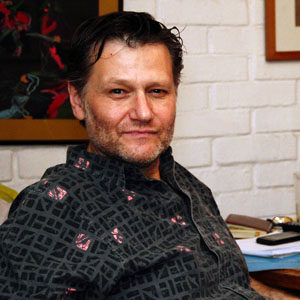 If I want to speak about and remember Valdivia, I have to go back, travel, and start over.
At the beginning of the 90s, I lived in Barcelona, and my understanding of Chile was hazy, although closer to praise and exaltation, the consequence of distance and time. During a visit by my father – a passionate traveler –, he commented, “Tomi (Tomás), a law is coming into effect for the State to support and finance artistic creation.” I write it here as a quote, but I don’t remember if this is what he said verbatim, but it was him that told me first about the existence of Fondart (government grant for the arts).

I related to life in a way that used to be light and hurried, so I didn’t pay much attention. I preferred sitting down with dad for a plate of anchovies at the Plaça del Pi, in the Ciutat Vella district. As a young man, I was rather blasé and detached regarding pragmatic immediacy. That’s what I think.
I worked independently at several animation studios, although I also drew and painted freely. However, I already had in my portfolio four animated shorts, made together with the master Heinz Edelmann (Yellow Submarine), during my studies in Stuttgard, before Barcelona. Cycles were coming to a close, and I felt a move was coming. For all the reasons in the world, or for none at all, I returned to Chile. The country was immersed in a process of renovation, which predicted transformations and rotations.

A short while later, I arrived at the first or second edition of the Valdivia International Film Festival, with an unpublished, cheeky animation called Reunión, made in 35 mm and optical sound. Everything before that was filmed in 16 mm, with magnetic sound.
Before talking about the affectionate and cordial landscape that was my first visit to Valdivia, I would like to briefly describe the creative process behind Reunión. I remember the analog and physical world as an amulet I carried around in my backpack. I would sit at a café to check the Fondart forms, exploring the requirements to apply. There was a collective credibility and trust. Letters of commitment and triumphant certainty were not required. Enthusiasm and tenacity were, and still are, contagious. How is it possible to predict the success of any work of art? I remain ignorant.
Art, in every dimension, continues to be emancipated and absolved, if it reflects genuine and historically avant-garde expression, from the heart of society, which later survives and leaves a mark. Technology, entertainment, questioning and controversy all make up the creative scenario.
That way, all of us screened our pieces at the Festival Cine Club. The fresh and progressive dialog and debate was a find for me, and possibly for everyone else at the event. This effervescent dialectic and reflection around moving pictures took of in the country’s south, conceding and motivating the opinions of the voiceless, the shy, the repressed, on the verge of explosion, the spectators: everyone.

Spending time together with colleagues during those days in Valdivia had an adventurous component. We were guests at an austere hostel that creaked with the wind. My rectangular room was asymmetrical, so the door wouldn’t close properly. Nothing mattered; nothing clouded the happiness of this gathering. In my case, I sensed a breeding ground for new artists and colleagues, anxious to share our experiences.
Breakfasts with Nescafé and toast: it was completely far-fetched to demand or expect any request or complaint regarding the infrastructure of what was possible. We were aware of the beginnings of a new stage in the country, where now we had state funding available to create and express our deliriums. We had to be cautious and modest. Everything was plain and tangible, without the comforts of the internet, and the historic moment circumscribed around celluloid.

Valdivia harbored us, in the south of the country, entrenched between cinema and the countryside, affording us an absolutely privileged kind of shelter, to meet and recognize each other as novel and free creators.
During the coming years and decades, I had the chance to attend the Valdivia Festival as a participant and jury member, and as honoree, in 2011 – always observing that initial spirit. I guess the distance from the capital influences visitors, resulting in a camaraderie that is removed from the feigned stability Santiago affords us.

I remember spotting disoriented students around the Valdivia streets, whom, as a consequence of a chance encounter, would embrace me as if we were in Siberia. At once, we would sequester ourselves at some bar, and the conversations would begin. I believe our country’s dramatic geography, delineated by the mountains and the sea, that is, by the imposing stronghold and the cliff, plays an influence in a certain group apprehension to the risk of projecting oneself, alone, in the driest desert in the planet.

In current Chile, human closeness, primarily in Santiago, usually happens as an accident, not without its risks. There is fear, but there is also curiosity and appetite for the other. The country boasts a privileged technological level in the region. There are probably more cellphones than human beings, thus evidencing a technological chaos, which in turn establishes another dichotomy: experiencing human interaction through the diverse social network applications, diminishing and debilitating real encounters. Trust in technology, which postpones real human confluence, causes misunderstandings, solitude, and the imminent danger of extinguishing ties and harmony, which in other times were reliable and authentic. I don’t think a mechanical device will ever replace the veracity and infinite character of human body language.

In 2001, I received the award for best animation at Valdivia, for Manos Libres, which made reference to the solitude of a woman next to her phone. I mention this to highlight another situation that happens in Valdivia: people want to talk, to relate to one another, and to use their cellphones to arrange real encounters, because that strange sensation of being adrift, alone, prevails – some 850 kilometers from home.
I insist: the device is a tool to reach the goal, and that way, we can get involved in a conversation around cinema and art, and also, it is a bridge, to speak about ourselves. This is a pretty miserable reality in the capital. All this closes a circle, but goes through the wall or the technological platform, to conceive a face-to-face without fear. We are far from Santiago. Technology as a tool, to embrace and wring out that objective, works.
When I mention this idea of the cycle, I go back to the 90s, a time in which we managed without this wall, to meet and talk. The value of the encounter as an irreplaceable human phenomenon, overcoming rugs, fireflies in an artificial space, and unnecessary tricks that drive us from the central objective; this is how I feel about the Valdivia Film Festival. Any spontaneous conversation, within a cultural event, can lead to a collaboration, coproduction, national and international cooperation, and can also achieve a workspace limited by dates.

I went there last in 2016, the year when my father left this world. I was there only three days, but it was an uplifting reconnection with friends, in the south, in that tent I didn’t know, but that brings the audience together, without the possibility for deviation, bifurcations or fear of the face-to-face.
Film festivals sometimes suffer from failed meetings and guests becoming lost, unable to manage that attendees have chances to meet that cannot be put off.
Magic Dream, made in the time between 2013-2018, is an absurd in the times of cholera. That animated creature seems somewhat scared, like that character in the middle of the desert I mentioned earlier. I will never paint 5,000 frames alone again.
In the middle of this need to triumph, overcome, long for and win, I insist that, many times, the container, the package and/or the marketing exceed the work itself. However, the exhibition and recognition of a piece or an artist is also necessary, before they wilt and disappear.
This is my corporeal tribute to Ulrich Welss, beloved father.

“Modernity is the transitory, the fugitive, the contingent, which make up one half of art.”
Charles Baudelaire.
Long live Valdivia 2018