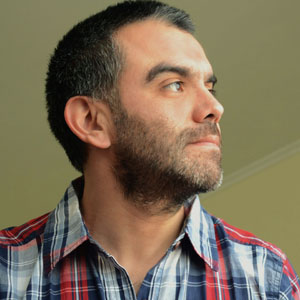 Valdivia in the fall. The first encounter.
I’m on the other side of a road where time passes by quickly.
It is the side of the road where one becomes aware that things end.
There might have been a beginning, and it was like a dream, an illusion.

The seasons went by, the bus trips, the hours waiting, the wind and the cold.
So did watching through the window, while outside, the rain washed away the past, the sadness and incomprehension, the fear of being oneself.

Valdivia was that. But becoming aware of that was long and hard. The illusion fell apart quite soon. The images inside died down. Pain became more present, and death drew its closeness on the window.
After everything faded away, the cold appeared once again, which made me feel alive. A new bus ride. A love story heard at a bus stop. A wedding that never happened and that brought with it the illusion that not all was lost. That not everything was as bad as I thought.
And, a new film ended up being the salvation. A new illusion. Now I know I won’t have to die too soon. Before my time. This is all I know now. It is all I need to know.

A new autumn. Now, towards the end of the season, at the beginning of a spring with new airs, and a death that walks beside me, but remains silent, the witness to a passing laughter, a small, nonsensical gesture that alleviates the weight of the hours.

Valdivia, here I come. We must speak about our love. We are going to invent a word for it, so that it is unique, only recognizable by the two of us. We will invent a gesture that makes us laugh like crazy, while no one else realizes our complicity.

I am better now. Now, death is not solid. It is only a state that disappears without leaving a trace. I’m ok now.

A new bus ride. I look out the window and the nighttime draws an illusion. In the distance, I see a woman walking under the rain, aimlessly. When I arrive in Valdivia, I will eat something powerful, that makes me feel alive, that makes me feel my insides until I say I’m alive. I want to be able to scream it under the rain, at a movie theater, while everyone else gets up to look at the madman making a scene, not letting them watch the film. I’m going to scream in Valdivia because I feel alive, and I just realized it. I have to scream it. Let everyone know. I’m not dead anymore. Now I can open my heart. Now I can try to live.
In Valdivia at first, then everywhere, every moment, every second of my life. I no longer want anything. I don’t need anything. Nothing to condition me. All that is missing is that I leave this place, although I still don’t know where. But, it doesn’t matter. Yesterday, I watched a Hungarian movie, and then I walked to the hotel, and I know I can leave without looking back. The wind in my face makes me feel alive. Now I know one day I’ll be able to say: this is the end, this is the horror of the end, this is death, but I no longer mind dying.
Here, I feel the smell of wet soil. I hadn’t thought about that for a long time. I know I’ll be able to take a bus, and die in Valdivia. I know I’ll do it one day, and I’m not going to mind, because the wet soil will alleviate my pain. And, the movies will continue, the images will continue, and so will the illusions, over and over. In Valdivia, and anywhere else you feel no fear.