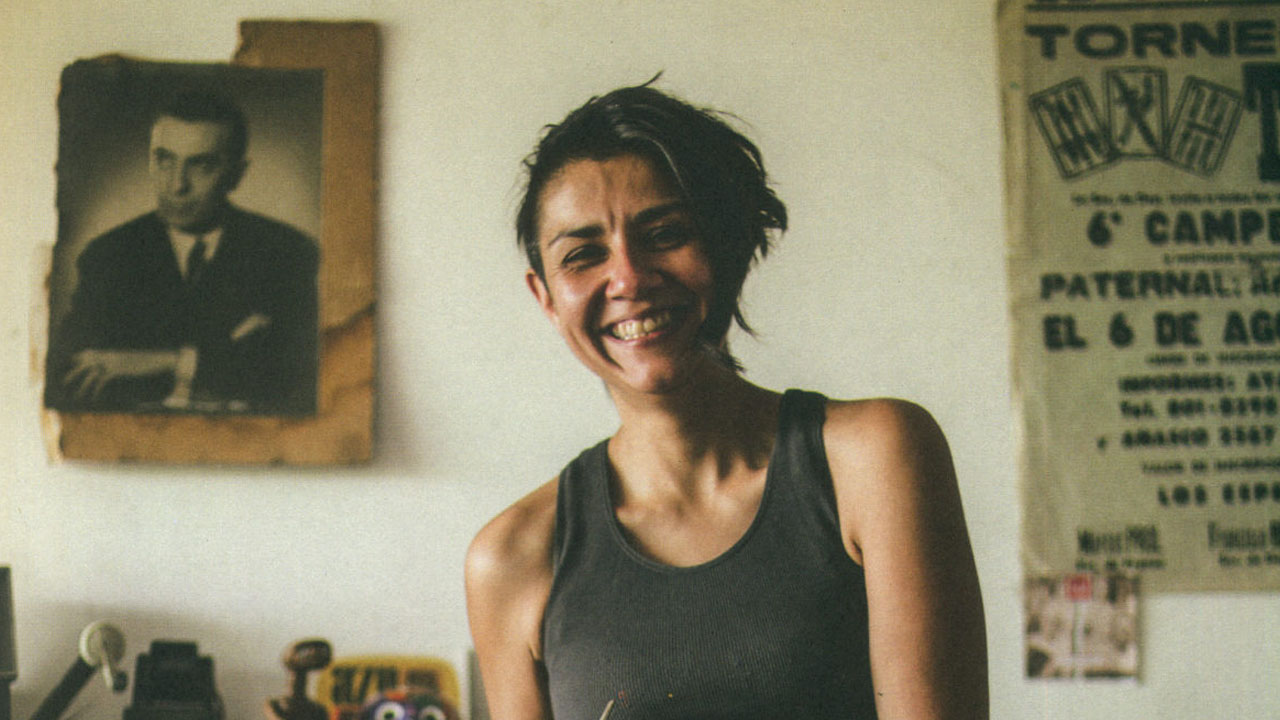 “The exercise of trial and error really interests me, the idea of always celebrating the mistakes”

Although she was born in Mexico, Azucena Losana has done most of her creative work in Buenos Aires. Between North and South America, the director has bolstered collaborative work around experimental cinema, particularly with the possibilities in “expanded cinema,” a work modality that aims at combining simultaneous audiovisual projections, as a way of turning that multiplicity of images into an unrepeatable, mass experience. Expanded cinema was popularized in the seventies, in underground creative circles, and part of that spirit, whose aim is reconsidering the cinematographic space as a fixed screening experience, was reflected in the program the author brought to Chile, one of our guest filmmakers in the 26th edition of FICValdivia.

Losana mostly uses material in 8mm, and in Super 8, both found footage, as well as films she shoots, actively working in her staging, contributing to its visual, and auditory materiality, during each screening. To that end, she utilizes the sound of the projectors, distorts the original audio, and combines images of opposing nature, that complement each other in counterpoint.

In the program showing at Paraninfo Hall during the Festival, which ran for approximately half-an-hour, Azucena Losana presented 12 works that describe the breadth of her interests, which range from the records of diverse trades, to the relationship between formats, where she confronts both the visual textures of the elements onscreen, and the precarious nature of materiality.

I am from Mexico City, and at some point when I had already approached image through photography and video, I joined a collective, an audiovisual troupe called Trinchera Ensemble. There, we did that thing called expanded cinema, utilizing analogue projectors, making image collages, with live music. That’s how I came in contact with analogue cinema.

What was your initial interest in photography?

I belong to a generation that is transitioning between mediums. I started taking photos on film, then digital arrived, and then I went into video, so I have lived through this transition. When I started working with analogue projectors, I wasn’t really using film; I utilized overhead projectors and objects, or slide projectors, but not with slides, using the light with modulators. That was my starting point. Then, I went to study in Buenos Aires, in 2007, and I discovered there was already a really interesting experimental cinema scene. That’s when I ran into Claudio Caldini – who was here in Valdivia, a few years ago. I took one of his workshops. He gave me a small Super 8 camera, and that’s when I started filming, because until then, I had only worked with found footage, and objects. So, I went into that other way of making cinema, which is filming, and developing. A short while later, at a residency, I learned to develop the film, and I became a lab technician.

I was interested in experimenting and directly accessing the material, both physically and chemically. It is a small feat of magic to be able to go into all of that, which lies on top of what can later be seen. I was also very attracted to the logic of machines, the analogue projectors that are super transparent, and completely noble. Their functioning is diaphanous and naked, and one can see it, and access it, intervene, and utilize it, in one way or another. I believe I am really interested in the conjunction of those things, not just when I’m filming. Because, it’s not just the projectors; it’s the cameras, and many other ways of accessing light. It is the direct relationship with light that is produced through them.

In the developing process, do you tend to modify the nature of the image you are working with, or do you try to get the cleanest possible one?

I think it depends on the idea. Working for many years as a lab technician, meaning developing other people’s films, I realized it is an enormous responsibility, similar to being a midwife. That responsibility is a little stressful, especially when working with chemicals, which forces you to be very respectful, as well as meticulous, clean, and organized. But, when making my own movies, I felt like breaking with everything, getting into trouble, playing, experimenting, and thinking, “what if I put more of this, and less of that?” I am very interested in the trial-and-error exercise, the idea of always celebrating the mistakes, because they always take you somewhere insurmountable.

How is your creative process; where do you begin?

I think the way in which we operate in experimental cinema implies a dual job for me. There is an initial task at the time of filming, if you are filming, or at the moment when you come face to face with footage, and get an idea of how to operate on it. The second part is thinking how it will all take place at screening: how it will run through the projector, how many projectors, what is going to be sounding or not sounding, as well as the idea of shooting, and screening, because the amazing thing here is that the show, although it may not be a performance, although it may be a short film, will never be the same twice.

What is the specific role of sound in this staging?

In my short films where I portray characters or cities, sometimes I capture the sounds of these people or places, as field recordings. Sometimes, I like to make the sounds, especially during performances. I’m interested in making live sounds, as part of that unrepeatable aspect. In one of the two performances I did here in Valdivia, called Colibrí, the sound is something that will never be the same twice, because it’s the sound coming from the projector, and at the same time, I’m equalizing and moving it in the moment, so it’s new all the time.

Develar, and other pieces you’ve made are very abstract, while others have a figurative nature that is almost entirely documentary.

In Develar, that blue film in the background is proof of my experiment in wanting everything to go wrong during color development. When I was a lab tech, many people came to tell us, “I found this film in my grandmother’s trunk, or inside an old camera!” Then, I started trying my luck, but I also had the responsibility of bringing back that image of grandmother. Developing in color by hand is very hard, because you have to be extremely careful, there are many steps, and in Develar, I wanted to start doing everything in different ways. The result in the first of the two images was that everything had a hue that was very similar to the blue of Lake Bacalar, which is where the character in the second image is swimming. And, of course, that is the least figurative, and the first thing, to appear in that film.

In a more thematic dimension, the most permanent aspect in the program you showed here in Valdivia is the observation of certain trades: fishermen, projectionists, neon light installers, who have in common a manual relationship to certain objects.

That vision has been a bit circumstantial because, when I was observing and documenting characters I was interested in, who later became my friends, I realized I had a collection of portraits related with that anthropology of manual trades, which was also an homage to those that are, day after day, swimming against the current. Additionally, I was interested in bringing attention to something we naturalize everyday, which is the way we live, and all the politics related to that way of living, taking into account that most of them are trades they inherited from their parents, and that they have no one to hand them down to.

These trades are on verge of disappearing.

Yes, and the idea is to leave a record of them, not with the objective of being apocalyptical, or anything, but as an ode to these characters that are very beautiful; all of them possess a strength that no one seems to have in their daily jobs.

In that vision, there is also a work with memory that, I believe, is present in the things you shot in Prague, which are records of something that is disappearing, or no longer exists, like in Kapry, or in Karl-Marx Alle.

Yes, when there was a selection of my work at Cinema Periférico de La Coruña, Elena Duque, who curated the program, defined it as “anthropology and archaeology,” and, of course, I hadn’t thought about it that way. The archaeology relates to scratching about, and showing layers of something, but there are places where you don’t have to scratch much. Mexico City has a lasagna of history layers that are always in plain sight, and I am very interested in noticing those things, wherever I go, especially the layers of stories one heard sometime in the past, or read sometime; sometimes you have those right in front of you, and they are amazing, like the buildings of the communist era in Berlin, with their monumental character, and their quadrature, that are there – people live in those buildings, and they are a part of life.

What are you working on now?

I’m working on a couple of things, right now. The first is a found 35mm film about what they call “china girls” who are the leaders, the women that appear at the beginning of movies, in the color checks. I found several meters of that film, and I started to play with the perforations. I perforated her face, and exchanged hers with other faces, and thus, I put together a new performance, called Troco, which I showed at the Rio de Janeiro Cinematheque; I was very lucky because they had two 35mm projectors. I am going to screen it in Buenos Aires, and then, I’m going to the Mar del Plata Festival, which for several years has had a celluloid program at the Ambassador Cinema, the smallest and cutest venue for filmic material. Following that, there will either be a medium- or full-length picture. You already met César, the protagonist in Neón, and Daniel Vicino, the projectionist in Intermission. Well, now I’m with characters that work with machines that relate to light and time, and that is going to end up somewhere. I don’t know how long it will be, but I am filming them.