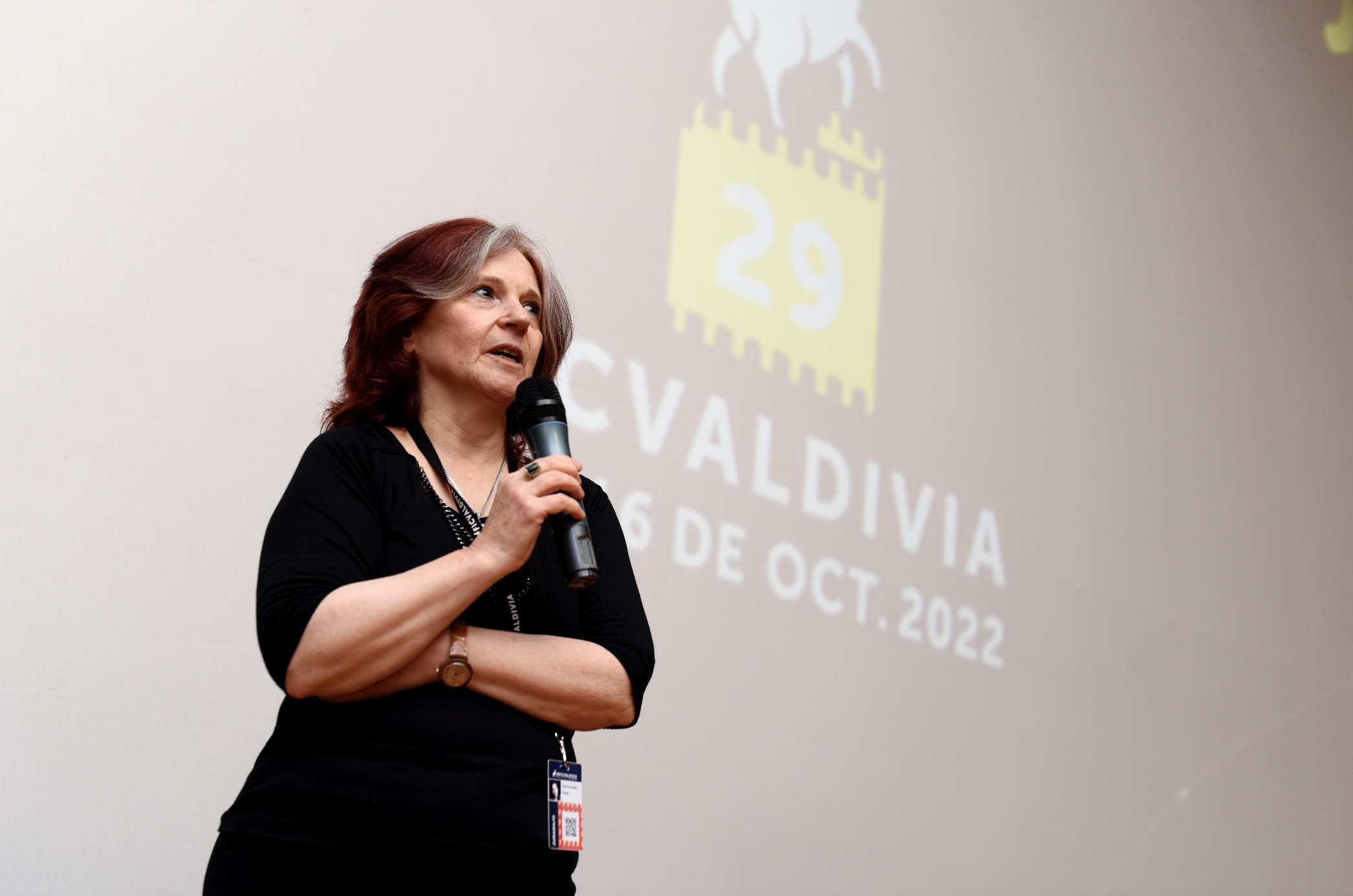 The Argentine director presented her First Feature ¡Que vivan los crotos! in 35mm to a full house. The rest of her compelling filmography is showcased during the festival week, which ends this Sunday October 16.

2020 was a difficult year for cinematographic events. In the middle of a pandemic, the Valdivia International Film Festival devoted a focus to Argentinean filmmaker Ana Poliak, one of the best-kept secrets in Latin American cinema. The online edition enabled broadcasting her films, but direct contact with the audience was pending.

Now, in this 29th edition, when health restrictions have been lifted, FICValdivia wanted to settle this debt with the great director, inviting her to show her work in 35mm. This is filmic luxury for admirers of her three full-length pictures: ¡Que vivan los crotos!, La fe del volcán, and Parapalos. Poliak is, indeed, an open secret, a unique filmmaker whose movies faced issues to be premiered in their moment. Film director, scriptwriter, editor, assistant director to renowned authors, like Fernando “Pino” Solanas, her name as a filmmaker has so far been left out of the greats in contemporary cinema.

Ana Poliak’s encounter with FICValdivia audiences began yesterday at Félix Martínez Hall, in Universidad Austral, with the screening of her first feature ¡Que vivan los crotos!. All the seats were filled, and the sound of the 35mm projector added to the irresistible charm of celluloid. “This is how the film should be viewed, to appreciate the labor of the people that worked in it,” the director commented, as an introduction.

Premiered in 1995, ¡Que vivan los crotos! mixes documentary with the recreation of scenes around recollections by José Américo Bepo Ghezzi (1912-1999), an engaging vagabond anarchist that traveled Argentina, walking, climbing on trains, living under bridges, and relating to other interesting nomadic characters he ran into, on the road. He finally settles in the locality of Gardey, where the film documents his testimony. It is a film of silences, evocations, remembrances, and ghosts, an exploration of memory. Ana Poliak was moved by her opera prima, after the screening.

“Most of the people in the film are no longer with us,” said the director, in a broken voice and with tears in her eyes, before an emotional audience. Then, she began to recollect the process of the film. “There was never a script. I had notes and ideas. I worked with Solanas, in El exilio de Gardel and Sur, and he had a fantastic system. There were no computers then. He had a kind of folder with clear filing pages, and he would place index cards in them, with every sequence he imagined, which he could later move around. In every sequence, he would go adding things. I said to myself, ‘this is great’, and started using photos, things I thought corresponded to each scene. That was my script during shooting.”

Poliak says she filmed the entire movie with the original idea of mixing Bepo’s experiences with an imaginary character of his creation. “If I wanted to keep that idea, when the testimonials of these special individuals appeared onscreen, the structure of the resulting device annihilated the humanity of these characters. I worked four months in the editing, and discarded that original plan,” she confessed. Years later, she found the definitive form of this sensitive and special feature film, which captivated the festival audience. “This picture means so much to me. Thank you for being here,” acknowledged one of the moviegoers.

The Focus devoted to Ana Poliak continued this Tuesday morning, with the screening of La fe del volcán, and will carry on tomorrow, with Parapalos. The director’s three full-lengths will continue to show during the festival week.