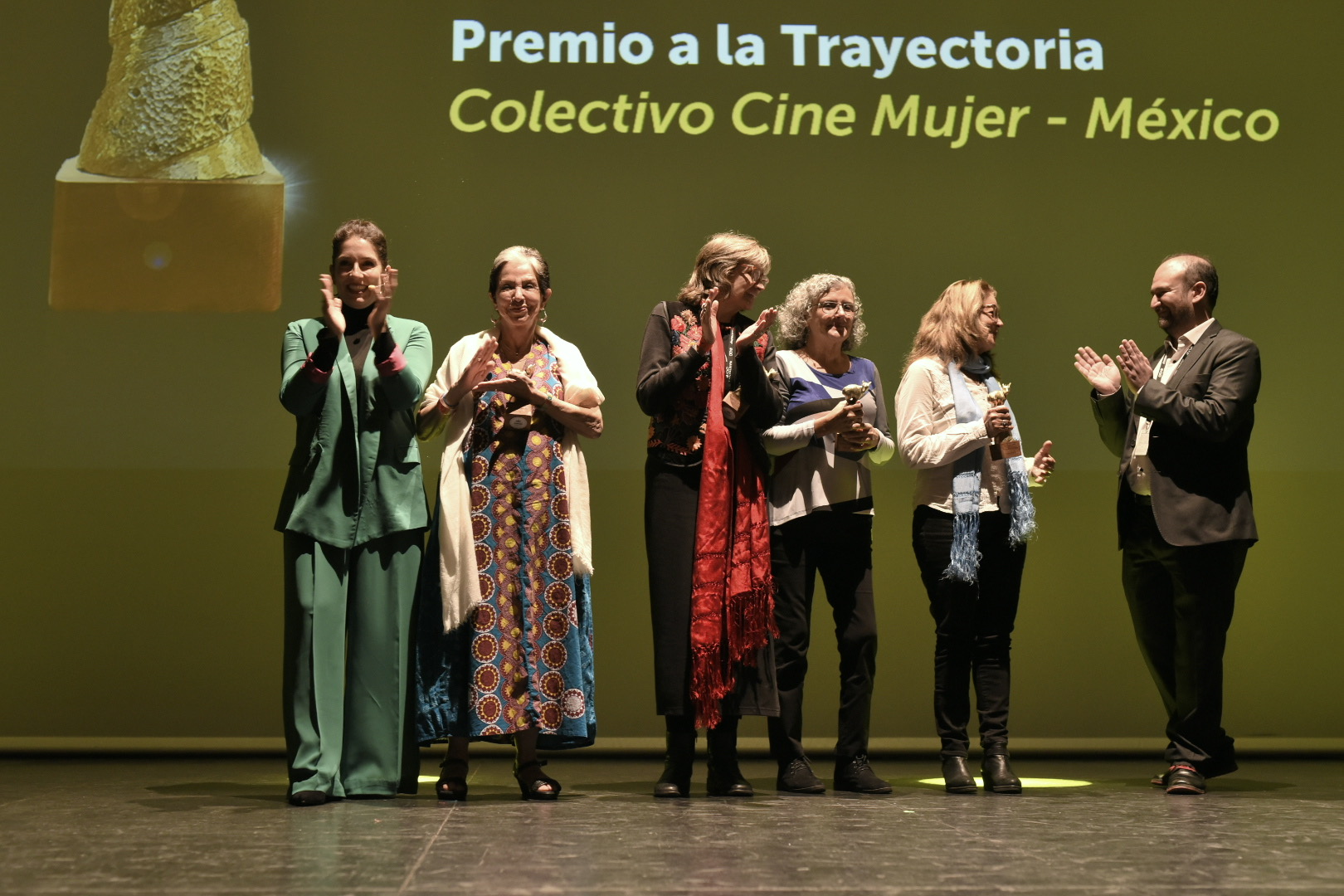 The Opening ceremony was hosted by actress Mariana Loyola.

Valdivia, October 10, 2022. At 8pm this past Monday October 10, the Opening Ceremony of the 29th Valdivia International Film Festival took place at the Cervantes Theater. 500 people filled the venue to set off this edition that marks the awaited return to in-person activity.

“We are very happy to see each other once again, live,” said Mariana Loyola, hosting the ceremony.

Details of the films in the 2022 FICValdivia Official Selection were announced during the inauguration, along with the jury members that will have the task of evaluating and awarding these motion pictures. Likewise, the Opening, Central, and Closing Features, the Filmmakers on the Spotlight, and Tributes were revealed.

Julieta Brodsky was the first authority to take the stage. She remarked “the achievement of 29 years carrying out the odyssey that is the festival, including two years in pandemic, which must have been very complex. They were not an impediment to continue generating identity, broadening cinema audiences, and projecting Los Ríos Region into the world.” The Minister also valued returning to the cinema after the health restrictions. “Coming together again around the cinematographic experience is important, as it always invites us to create community. The Valdivia International Film Festival makes us think of a decentralized Chile, inviting us to learn about other views, sensibilities, and narratives, inspiring us to build a cohesive country, from our diverse cultures.”

“We are happy to recover public spaces, to recover also our relationship to nature,” Los Ríos Regional Governor Luis Cuvertino emphasized. “The festival has brought Valdivia recognition, a heightened image, and national and international projection.”

Valdivia Mayor Carla Amtmann Fecci had moving words to highlight the future home of the Valdivia Cultural Center for Film Promotion (CPCV), valuing the return to venues, and projecting into the future. “We are going to face a complex year. We are in the antechamber to the festival’s 30th anniversary, in 2023, and it is going to be a hard year. The international context is complex: times of war, of violence, where extremist discourse gains traction, where an undervaluing of what makes us human takes over public debate, and amid a very complicated economic situation.” The mayor pointed out that, facing this panorama, the temptation is cutting culture budgets. “There, we must reaffirm that culture also means greater neighborhood security; culture is also creating community and recovering public spaces; culture is, above everything, to continue to connect with what makes us human: our creative capacity, our sensibility, our ability to be surprised, to dream, to permanently embrace hope.”

“Today, we can see the festival has consolidated throughout the entire region, an instance that is strongly engaged with the territory. It is from this territory in southern Chile that this festival projects today, thanks to joint effort from several sectors. Over 29 years, we have seen it become progressively more solidified, consolidated, and confident,” Universidad Austral Prorector Sandra Bucarey said, in turn.

“After two years of online encounters, we are happy to meet, to see each other in this place, ready to kick off the 29th edition of the Valdivia International Film Festival. Returning to this space, and to the collective viewing of works from yesterday, today, and tomorrow fills us with emotion,” were the words by CPCV Chair Loreto Vega, who shared with the audience images of a virtual model of the organization’s future home/cinema venue.

FICValdivia Director Raúl Camargo closed the opening remarks recognizing that “we are very moved by this return to venues. We are reuniting.” He also referred to the time between the death of African filmmaker Sarah Maldoror, in 2020, and the recent passing of Jean-Luc Godard. “There is an intervening period between these two directors that were so important, regarding taking a political stance from the avant-garde,” he analyzed, adding, “we learned many things from previous festivals, and what we learned was we wanted to make this one. This year is very complex. We deserve a celebration.”

During the instance, festival organizers presented the Career Achievement Award to Colectivo Cine Mujer, formed in 1975, in the Cinematographic Studies Center at Universidad Autónoma de México (UNAM), by a group of visionary female filmmakers that opened debate around abortion, rape, domestic work, prostitution, and sexist education.

Grateful for the accolade, Fernández valued the digitalization of negatives of Collectivo Cine Mujer films, done by Filmoteca UNAM and FICValdivia. “They have invested effort and resources to restore, restitute, and recover. We will now see the films we made 50 years ago with dignity, as we made them.”

THE RETURN OF RAUL RUIZ AND VALERIA SARMIENTO

The ceremony continued with a surprise that moved the audience: the screening of the trailer for “Realismo Socialista”, an unfinished film by Raúl Ruiz that is being recovered by Poetastros, the production house behind “La telenovela errante” (2017) and “El tango del viudo y su espejo deformante” (2020), two posthumous motion pictures of the cherished Chilean director.

The advance was presented by Chamila Rodríguez and Galut Alarcón, from Poetastros, who shared details about the picture, shot between 1972 and 1973. “Reconstructing and repatriating Raúl’s Chilean works, which for one reason or another he was unable to finish, has been a beautiful journey,” said the actress and producer.

The opening ceremony concluded with the exclusive premiere of “Un sueño como de colores”, by Valeria Sarmiento, a short film, shot in 1972, that was never screened because its negatives were lost after the coup d’état, until 2021. It finally saw the light thanks to recovery and restoration by the Universidad de Chile Cinematheque.

The film centers on two young women that work as strip-dancers at cabarets Mon Bijou and Tap Room. It was filmed in 16mm, amid the overwhelming effervescence of the political and social processes Chile was undergoing. It features the participation of renowned Jorge Müller behind the camera, and Pepe de la Vega, in direct sound.

FICValdivia’s 29th edition is taking place in October, from Monday 10 to Sunday 16, in a hybrid format, with eight in-person venues around the city. Additionally, there are other activities, talks, and live music performances. All the information at www.ficvaldivia.cl.